If there was ever a Nobel Prize given for extraordinary contribution to the field of littering and garbage mismanagement, it can be safely assumed that we Indians will win it… every year… till the doomsday (Which will probably happen after an epidemic that spread due to unmanaged waste in our country!). Don’t get me wrong, I am not writing this to blame anyone. Neither is this a complain post or something that tells you ten ways to manage waste. This time I am doing the opposite; I am going to tell you the best ways to become the Great Indian Litterbug! We always have the Clean India Campaign to tell people otherwise, right?

So starting with the obvious question, who is the Great Indian Litterbug? And what can I do to become one?

Well, to answer what you can do, I’ll just say ‘Continue.’ Yes! Just keep doing what you do. Some garbage here, some spitting there, a little pee on the wall and a lot of plastic bags that aren’t too small. Just spread it like a wildfire. To answer who is the Litterbug, I believe this video will do a better job.

A litterbug is no special man. It doesn’t take a rocket scientist to become the litterbug. All you need is perseverance and that ‘never say yes’ attitude. Did you somehow feel like throwing that banana peel in the dustbin? NO! Is there a public toilet nearby that you could use? Hell no! What about the germs? Go ahead and do it against the wall. It is open air… there can never be too many germs in there.

So how can you, yes you… become the litterbug? The answer lies somewhere in the following steps of what I call “The game theory of Littering”. Follow them and spread the dirt… I mean word.

If you closely follow everything that I’ve said above, no one can stop you from being the biggest messmaker around. You’ll be the Great Indian Litterbug. Your name will be written with sewage waste in the history books. You’ll be the mark of smell and your sayings will appear in every hospital out there! Be the one, our country needs you.

PS: This post was a work of satire, in case that wasn’t pretty clear already. We all know how important cleanliness is, specially when it comes to the masses. To know more about the Great Indian Litterbug, check this out http://greatindian.timesofindia.com. 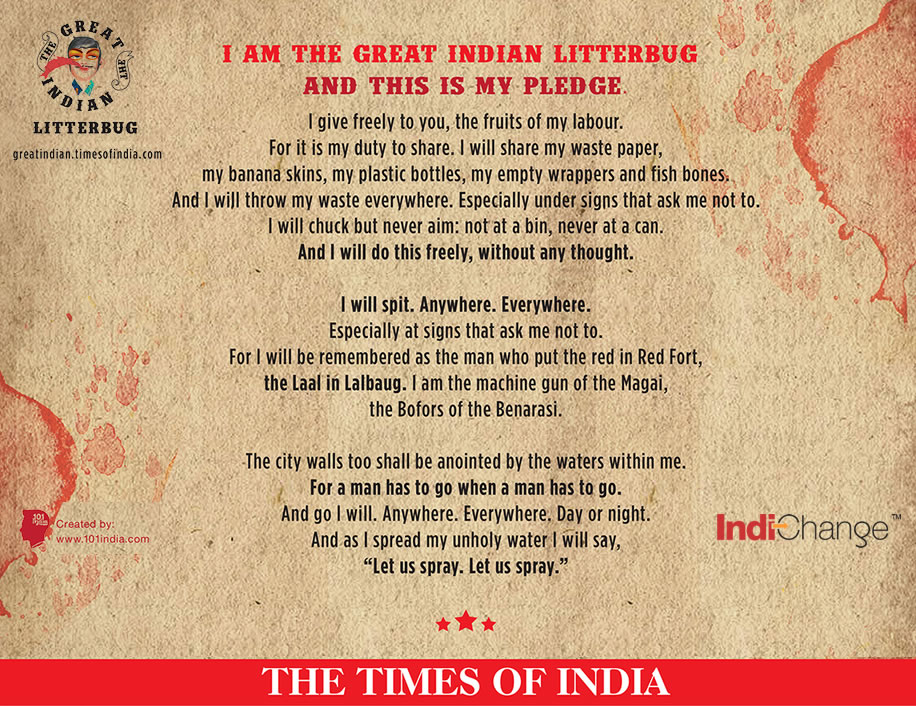 2 thoughts on “Being a litterbug.”