Hello government, You suck!!! Just when i was ready to post about the 5 message limit, you extended it to twenty!!!

But guess what, this is MY blog… I’ll post whatever I want. So go ahead. 😛

So this is my take on the recent ban on text messaging. After Christopher Nolan’s ‘ban’e, this is the next ban India is talking about. Actually saying a ban isn’t right, it is a restriction, now you can’t send more than  twenty messages each day. But for youngsters like us, this is even worse than a ban. Imagine a situation when your girlfriend got pissed off right after the twentieth message. Or you accidentally sent a wrong message and you don’t have one left to say sorry.

The most grief stricken are the students who used to laugh at their crotch during lectures, i.e. texted with the mobiles hidden behind the desks. Now they’ll have to actually attend the lectures!! I pity those who now cannot send me the messages saying a poor girl will get a dollar if I forward that to 10 people. Poor people! That was the sole way of entertainment in their otherwise worthless life.

Here are a few jokes that occur to my mind while I hear about the restriction and people’s reactions to it. 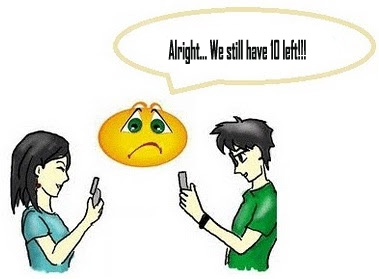 So how big is the effect of this restriction on your life? Tell me. Did you awkwardly keep staring on your mobile screen wanting the failed text to try one more time? Or you are spending way too much time on Facebook and Twitter now? I believe none of you can say that you didn’t try resending the sixth message when it happened for the first time.

From my side, I’d like to give a few suggestions to our government. Don’t remove the restriction, life seems peaceful now. At least people realize the importance of meeting and calling. For those who are far, we do have social networks to stay in touch. And in case you want to increase the restrictions, make it at most 2 statuses per day on Facebook. The people blabbering about this restriction are becoming way too annoying now.

And a few more restrictions can be on the number of likes every day. This way not ALL girls will get them and we’ll know who are the most intellectual hottest ones.